At Medicine Lodge River in Kansas, a third peace treaty is signed, this with the Cheyenne and Arapaho. 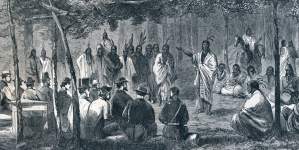 The Hancock-Custer Campaign against the Native Americans of the northern plains obstructing the construction of the transcontinental railroad and emigration west had been an ineffective failure. Changing tactics, the United States Congress authorized the formation of an Indian Peace Commission to negotiate treaties with the Sioux, Cheyenne, Kiowa, and their allied tribes.  On this day, at Medicine Lodge River in Kansas, a traditional Native American meeting site, the last of three treaties, this with the recalcitrant Southern Cheyenne and the Arapaho nations, who extracted what they thought were additional concessions in their movement to more southerly reservations.  The agreements were immediately controversial - one observer at the time remarked that the tribal leaders were never read the final terms and did not know what they were signing.  The Medicine Lodge treaties were later contested for decades in United States federal courts.  (By John Osborne)

How to Cite This Page: "At Medicine Lodge River in Kansas, a third peace treaty is signed, this with the Cheyenne and Arapaho. ," House Divided: The Civil War Research Engine at Dickinson College, https://hd.housedivided.dickinson.edu/node/47699.