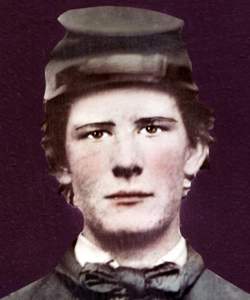 John Taylor Cuddy was representative of the thousands of young Pennsylvania volunteers who sprang to the defense of the Union in 1861. He was born in Carlisle, Pennsylvania on October 17, 1844, one of five sons of John and Agnes Cuddy who farmed and operated a distillery there. By the time he was fourteen he was working full time in the family business. In April 1861, he joined the Carlisle Fencibles, volunteers being raised in the town. The Fencibles later became Company A, 36th Regiment, 7th Pennsylvania Reserve Corps, and Cuddy was mustered in as a private on June 5, 1861. He saw extensive and bloody combat with the 36th, first in three battles in Virginia during June 1862 and then at Second Bull Run, Antietam, and Fredericksburg. In May, 1864, Cuddy marched with the 36th into the Battle of the Wilderness. On May 5, 1864, the regiment was cut off and forced to surrender all its 272 officers and men. These included the thirty-three survivors of Company A, many, like Cuddy, just one month away from ending their three year enlistment when captured. Cuddy arrived at Andersonville Prison in Georgia on May 22, 1864. Sixty-seven men of the 36th died there in the next four months. Cuddy survived but when he was transferred to another prison in South Carolina, his health finally gave way. He died in Florence Stockade on September 29, 1864, eighteen days before his twentieth birthday. Scores of the letters he wrote home before his capture are preserved at Dickinson College in Carlisle. (By John Osborne)
Life Span
10/17/1844 to 09/29/1864
How to Cite This Page: "Cuddy, John Taylor," House Divided: The Civil War Research Engine at Dickinson College, https://hd.housedivided.dickinson.edu/node/5511.