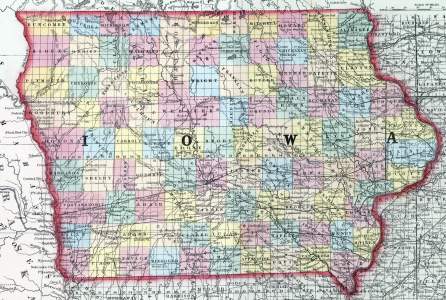 Boundary and Extent. — Iowa is bounded north by the Territory of Minnesota; east by the Mississippi River, which separates it from the States of Wisconsin and Illinois; south by the State of Missouri; and west and north-west by portions of the Territories of Nebraska and Minnesota, from which it is separated by the Missouri and the Big Sioux Rivers. The country lies between 40° 30' and 43° 30' north latitude, and extends from 90° 30' to 96° 30' west longitude; reaching some 200 miles from north to south, with an average extent of over 220 miles from east to west, and comprehending about 51,000 square miles. (Gazetteer of the United States of America, 1854)
How to Cite This Page: "Iowa," House Divided: The Civil War Research Engine at Dickinson College, https://hd.housedivided.dickinson.edu/node/9085.