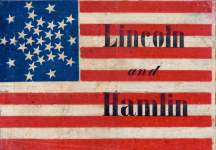 10/09/1860
Elections for state-wide offices were held the same day in Pennsylvania, Ohio, Indiana, Iowa, and Minnesota.  All resulted in Republican victories with men like Andrew Gregg Curtin in Pennsylvania and William Dennison, Jr. of Ohio elected to the governor's mansion.  The size of their majorities made it clear that the Lincoln-Hamlin ticket would sweep these states in the upcoming general election and the news further stimulated talk of secession in the South.  (By John Osborne)
Source Citation
"The October Elections," New York Times, October 12, 1860.
How to Cite This Page: "Republicans sweep to victory in state-wide elections in Pennsylvania, Ohio, Indiana, Iowa, and Minnesota," House Divided: The Civil War Research Engine at Dickinson College, https://hd.housedivided.dickinson.edu/index.php/node/34140.