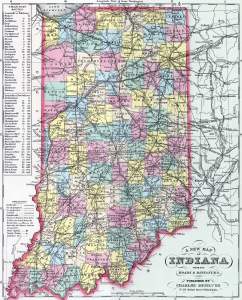 Population. — The population of Indiana, since the year 1825, has increased with unexampled rapidity. At that date, the number of inhabitants was estimated at 185,000. It is now, in (1850,) 988,416. Among the causes which have conduced to attract settlers thither, the extraordinary fertility of the soil, the low price of lands, the facilities for inland water communication, and the healthful climate, are doubtless among the most prominent. (Gazetteer of the United States of America, 1854)
How to Cite This Page: "Indiana," House Divided: The Civil War Research Engine at Dickinson College, https://hd.housedivided.dickinson.edu/index.php/node/9098.