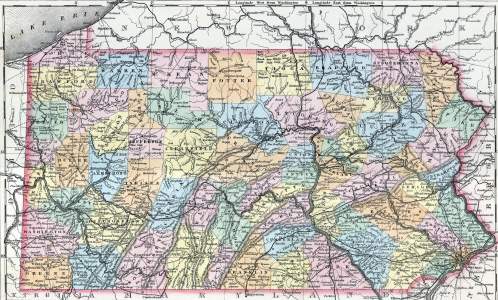 Internal Improvements. — The position, extent, and resources of Pennsylvania have naturally stimulated her people to the establishment of all needful facilities for the promotion of her great agricultural, manufacturing, and commercial interests. Accordingly her revenues and credit, and the means of her wealthiest citizens, have been liberally devoted to the construction of various descriptions of public works, some of which are on a scale of great magnitude. Railroads and canals intersect the country in all directions, connecting the tide waters on the eastern boundary with those of the Ohio, and between all the principal points of trade throughout the state… (Gazetteer of the United States of America, 1854)
How to Cite This Page: "Pennsylvania," House Divided: The Civil War Research Engine at Dickinson College, https://hd.housedivided.dickinson.edu/index.php/node/8984.