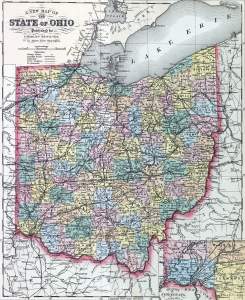 Boundaries and Extent. — Bounded north by the State of Michigan and Lake Erie ; east by the States of Pennsylvania and Virginia, being separated from the latter by the Ohio River; south by said river, which divides it from Kentucky ; and west by the State of Indiana. The Ohio River washes the border of the state, through its numerous meanderings, for a distance of over 430 miles. From the time when the first census was taken, a period of only 60 years, the number of inhabitants has been augmented from 3000 to nearly 2,000,000....(Gazetteer of the United States of America, 1854)
How to Cite This Page: "Ohio," House Divided: The Civil War Research Engine at Dickinson College, https://hd.housedivided.dickinson.edu/index.php/node/9024.