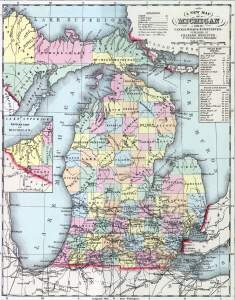 Population. — Michigan, like the other North-western States, is peopled by the representatives of divers lands and races. The natives consist of the descendants of the aborigines, of the first French settlers, and mestizoes, or the offspring of white and Indian progenitors. Among the foreign population are immigrants from Great Britain, Germany, and other European countries; and there are multitudes of settlers from New England, New York, New Jersey, Pennsylvania, Virginia, and Canada. Very few of the African race are found in the state. (Gazetteer of the United States of America, 1854)
How to Cite This Page: "Michigan," House Divided: The Civil War Research Engine at Dickinson College, https://hd.housedivided.dickinson.edu/index.php/node/9097.