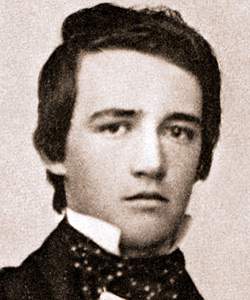 Horace White helped supply the free-soil settlers in Kansas with arms and ammunition, befriended Abraham Lincoln, and covered the Lincoln-Douglas Debates for his Republican newspaper, all before he was twenty-five. He went on to become the editor of the New York Evening Post and one of the country’s leading writers on finance and economics. Born in New Hampshire, he grew up in Beloit, Wisconsin, where his father worked for the New England Emigration Company aiding anti-slavery settlement in the West. He graduated from Beloit College and took a post as city editor of the Chicago Evening Journal, where he met Lincoln, then became assistant secretary of the National Kansas Committee in 1856, dealing with, among others, the sons of John Brown. By 1858 he was at the Chicago Tribune and covered, with shorthand expert Robert R. Hitt, the senatorial debates of that year, providing readers a verbatim transcript each following day. He also met Henry Villard at this time and during the war the two operated a news agency in Washington D.C. When Villard later purchased the New York Evening Post, he installed his friend as one of the editors and White worked there till his retirement. His reputation as a reporter and writer on financial matters was unequalled and he served as chair of New York's committee investigating Wall Street in 1908. Described always as kind and sympathetic, he was twice married and was survived by three daughters when he died in New York City in September, 1916. (By John Osborne)
Life Span
08/10/1834 to 09/16/1916
How to Cite This Page: "White, Horace," House Divided: The Civil War Research Engine at Dickinson College, https://hd.housedivided.dickinson.edu/index.php/node/17476.