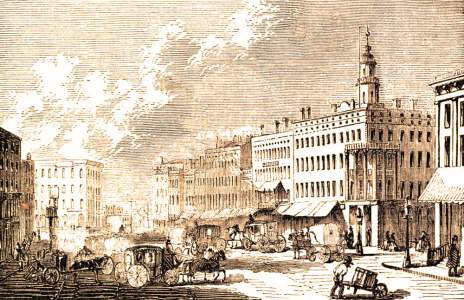 The harbor at the mouth of the Cuyahoga, since its improvement, by piers on each side extending into the water, is one of the best on Lake Erie, and its position at the northern terminus of the Ohio Canal, and the fertile country and enterprising population by which it is surrounded, have given it a very rapid growth, which as yet is but just commencing. It is already the second commercial town in Ohio, and bids fair even to rival Cincinnati. Besides its intercourse with the interior of the state by the Ohio Canal, and its extensive lake commerce, it communicates by the Ohio and Pennsylvania Canal with Pittsburg. and by the New York and Welland Canals with the Atlantic coast.... (Gazetteer of the United States of America, 1854)