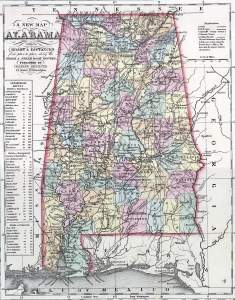 Physical Aspect. — The face of Alabama is somewhat varied. Near the gulf of Mexico the country in low and level, embracing numerous swamps and savannas. A large portion ot the upland, toward the centre, consists ofpine-barrens, thinly wooded, or covered with coarse grass. The soil here is generally sandy and thin. The central part of the state consist of a table-land, with a deep, rich, productive soil. Toward the north, the surface becomes mountainous and hilly, beyond which lies the valley of the Tennessee, where the soil is highly fertile. (Fanning's, 1853)
How to Cite This Page: "Alabama," House Divided: The Civil War Research Engine at Dickinson College, https://hd.housedivided.dickinson.edu/index.php/node/9092.