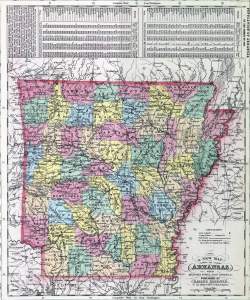 ARKANSAS, one of the United States, lies between 33° and 36° 30' north lat., and 89° 30' and 94° 30' west long. from Greenwich; and is bounded north and northeast by Missouri, east by Mississippi river, which separates it from Mississippi and Tennessee, south by Louisiana, southwest by Texas, and west by the Indian territory. Its superficial area is 52,198 square miles.
Physical Aspect. — In the eastern part of the state, say a distance of 100 miles from the Mississippi, the country is low and wet, and much of the land, except along the borders of the streams, is subject to inundation. With the exception of some prairie, the eastern portion is covered with dense forests. The soil here, where arable, is of the most productive kind. In the middle of the state, the surface is uneven and broken, and in the western parts it is mountainous and hilly, interspersed by timber lands, prairies, and barren plains. In some respects, Arkansas may be regarded as a barren country, although along the margins of the streams the soil is generally fertile, but remote from these it is sterile and poor.
Mountains. — The chief mountains in this state are the Ozark, which lie at its northwest corner, rising to a height of some 2,000 feet. A range of hills, called the Black mountains, runs between the Arkansas and White rivers, extending from the latter to the western border of the state.
Rivers and Springs. — The principal rivers that traverse this state, are the Arkansas, Wachita, White, and St. Francis. The Mississippi waters its almost entire boundary on the east. Toward the source of the Wachita, there are hot springs, which are much resorted to by invalids. Their waters are pure and limpid, possessing little or no mineral properties, and, though varying considerably in the range of their temperature, sometimes rise nearly to the boiling point.
Climate. — The climate of the easterly part, particularly on the borders of the rivers, is generally moist and unhealthy; but in the middle and westerly portions it is regarded by the settlers as salubrious. The climate of the southerly part, resembles that of Louisiana, while that nt the north is similar to Missouri.
Productive Resources. — The staple products are, cotton, wool, lumber, peltry, wheat, oats, potatoes, tobacco, Indian corn, cattle, horses, and mules. The southern portion of the state is well adapted to the cultivation of cotton. Its mineral productions consists of iron ore, lead, gypsum, salt, and coal.
Manufactures. — The manufactures of Arkansas are confined principally to supplying the immediate wants of the people. The number of manufacturing establishments in the state, in 1850, producing $500 and upward each annually, was 271.
Commerce. — Arkansas has no direct foreign commerce, its staples being shipped principally at New Orleans; but its river trade is considerable.
Education. — There is no collegiate institution in Arkansas. It has about 15 academies and 200 common schools.
Population. — In 1820,14,273; in 1830, 30,388; in 1840. 97,574; in 1850, 209,639. Number of slaves, in 1820, 1,617; in 1830, 4,576; in 1840, 19,935; in 1850, 46,982.
Government. — The legislative power is vested in a general assembly, consisting of a senate and house of representatives. The senators are elected by the people, by districts, for the term of four years; the representatives, by counties, for two years. The senate consists of not less than 17, nor more than 33 members; the house of representatives of not less than 54, nor more than 100 members. The general elections are holden every two years, on the first Monday in October, and the legislature meets biennally, on the first Monday in November, at Little Rock. The executive power is vested in a governor, elected by the people once in four years; but he is not eligible for more than eight years in any term of twelve years. The judicial power is vested in a supreme court, of three justices, in circuit courts, in county courts, and justices of the peace. The judges of the supreme and circuit courts are chosen by the general assembly, of the former for eight, of the latter for four years. Justices of the peace are elected by the people for two years. Judges of the county courts are chosen by the justices of the peace. Every white male citizen of the United States (excepting soldiers and seamen of the army and navy), a resident of the state six months, is entitled to vote at elections.
History. — Arkansas was originally a part of the province of Louisiana, and constituted a portion of that undefined region lying west of the Mississippi, which recelved not the tread of the white man until the present century, unless visited by De Soto, who explored the valley of the Mississippi in 1541. In the arrangement of territories it was separated from Louisiana and attached to Missouri. It remained in this connection till 1819, when it was erected into a distinct territory, under its present name. The Rocky mountains were its western limits; but by congressional acts in 1824, and by subsequent treaties with the Cherokee Indians, its area was curtailed. In 1836, a convention of the representatives of the people assembled at Little Rock, and adopted a state constitution; and the same year Arkansas was admitted into the Union as an independent state. (Fannings, 1853)