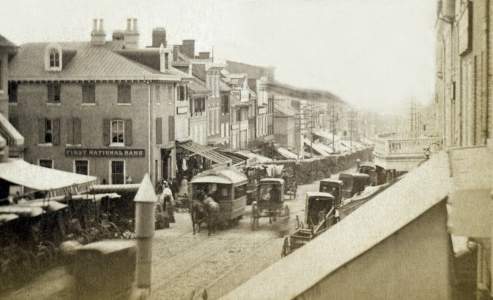 Wilmington, De., New Castle co. City, and port of entry. Situated between Brandywine and Christiana Creeks, 1 mile above their junction. 47 miles N. from Dover, and 28 miles S. W. from Philadelphia. Population in 1830, 6,628; in 1840, 8,367; in 1850, 13,931. Both the business and population of the place have rapidly increased within a few years past... The city is built on ground gradually rising to the height of 112 feet above the level of tide water. It is laid out with regularity; the streets, which are broad and airy, crossing each other at right angles. It is supplied with water from the Brandywine, by waterworks, like those of Philadelphia. The place is well built; the houses are generally of brick, and many of them are elegant. (Gazetteer of the United States of America, 1854)
How to Cite This Page: "Wilmington, DE," House Divided: The Civil War Research Engine at Dickinson College, https://hd.housedivided.dickinson.edu/index.php/node/9117.