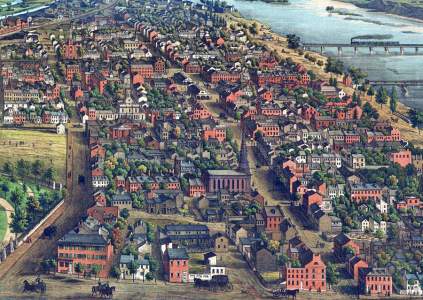 HARRISBURGH, the seat of justice of Dauphin co., and capital of Pa., is situated on the east bank of Susquehanna river, 97 miles northwest of Philadelphia, and 110 miles from Washington. It is a borough, built on rising ground, which subsides toward Paxton creek into a plain. From the elevation upon which the Statehouse stands, appears a wide and varied prospect of hills, fertile vales, and winding streams...Manufactures, to a considerable extent, are produced in Harrisburgh, and the town is gradually increasing in population and wealth. (Fanning's, 1853)
How to Cite This Page: "Harrisburg, PA," House Divided: The Civil War Research Engine at Dickinson College, https://hd.housedivided.dickinson.edu/index.php/node/9152.